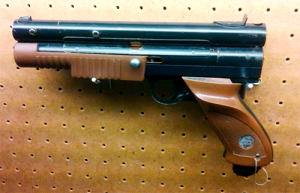 Paintball marker used in the first game of paintball, on display at the paintball museum. Photo courtesy of PbNation.com

The history of paintball goes back over 50 years when the very first paintball gun was invented in the 1960’s by Nelson Paint Company. The gun, or marker as they called it, was never intended to be used on people. Rather it was intended to be used by loggers and cattlemen. Loggers used these paintball markers to mark trees, while cattlemen used them to mark cattle while on horseback. The original paintballs used an oil-based fill.

The game spawned from a discussion between Bob Gurnsey (a sporting goods retailer), Hayes Noel (a stockbroker) and Charles Gaines (a writer). They were all good friends and they enjoyed sitting down over a beer or two and discussing all sorts of topics. One of the topics they’d been discussing, or debating, was survival in the woods.  Specifically they questioned whether or not a city dweller with street smarts could hold his own against a country person in the woods. This debate continued on for a few years.

One day a friend discovered Nelson’s paintball marking gun in an agricultural catalog. It was from that catalog which the idea of paintball was born.

The First Game Of Paintball

There’s little doubt the first paintball shot at a person probably occurred between loggers or cowboys, but the first official game of paintball took place on June 7th, 1981 in a wooded area of New Hampshire. Bob Gurnsey wrote the rules of the game. Four flag stations were set through a 125 acre plat of woods. Each flag station had a colored flag, one for each of the players. The winner would be the first player to collect his flag from all of the flag stations.

Each player was outfitted with a Nel-Spot Pistol, paintballs, basic eye protection, and a rudimentary map of the area. The players set off into the woods and the game began with the blow of a whistle. The strategies of the players varied. Some used their speed in an attempt to get to the flag stations before their competition. Others laid in ambush near flag stations, in an attempt to eliminate their opponents.

The first player to be eliminated was investor Ken Barrett.  He was eliminated by filmmaker Jerome Gray.

Ultimately the winner was forester Ritchie White. White chose stealth as his strategy. He quietly moved to each flag station, collecting all of his flags without firing a shot.

The Birth of an Industry

Soon after the first game, Bob Jones wrote an article about paintball that was published in the 1981 October issue of Sports Illustrated. By then Bob Gurnsey saw an opportunity and began selling a “Survival Game” package for $150. The package included a paintball marker, paintballs, goggles, and a rule book.  However, the game of paintball wasn’t called paintball.  It was first known as the National Survival Game.

In March of 1982, Bob Gurnsey opened the first commercial paintball field. His company, National Survival Game, contracted with Nelson Paint to be the sole distributor of their product. The National Survival Game business was franchised and fields began to open throughout the United States.

Later that year, players Jeff Perlmutter and Dave Freeman saw a business opportunity and attempted to work out a deal with National Survival Game. Unable to reach an agreement, they formed their own company called Pursuit Marketing Incorporated. They struck a deal with Benjamin Sheridan to develop their own paintball marker.